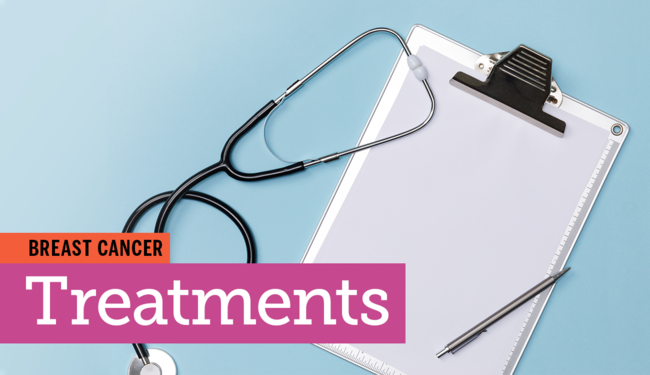 There are now more treatments for breast cancer than ever before, with new therapies being developed in clinical trials. Oncologists (cancer specialists) recommend treatments they think will be most effective based on the type of breast cancer and the stage. Oncologists also take into account your age, overall health, and any other conditions you have. Ultimately, the choice of your breast cancer treatment is up to you.

Types of Treatments for Breast Cancer

For many women, surgery is the first step in treating breast cancer. Other women may undergo chemotherapy first to shrink the tumor before surgery — this is referred to as neoadjuvant therapy. There are many different types of surgery to diagnose and treat breast cancer.

Lumpectomy, also known as breast-conserving or breast-sparing surgery, wide local excision, or partial mastectomy, is surgery to remove a breast cancer tumor along with some of the normal breast tissue that surrounds it. The goal in removing the normal breast tissue is to create clear margins and help ensure that no cancer cells remain in your breast. One or more lymph nodes near the tumor or in the armpit may also be removed during a lumpectomy. Unlike mastectomy, lumpectomy removes only a portion of the breast. The amount and location of the breast tissue removed depend on the type, size and location of your tumors.

Many women choose reconstructive surgery after breast cancer removal surgery in order to restore the appearance and feel of their breasts. There are many different options for reconstruction, including timing, types of surgery, and materials. For instance, reconstructive surgery can be started or completed immediately after mastectomy during the same surgery, or be postponed until a later surgery. Depending on your breast cancer, the surgeon may or may not be able to use skin-sparing or nipple-sparing techniques during mastectomy that will allow for a more natural-looking reconstruction. Reconstruction material options include silicone, saline and using your own tissue from another part of your body. Each choice has its own benefits and risks. What type of reconstructive surgery you choose can depend on the specifics of your breast cancer, the size of your breasts and of your body in general, what type of insurance you have, and how important it is to you that your reconstructed breast and your healthy breast closely match.

Any type of surgery carries risks including blood clots, blood loss, infection, breathing problems, reactions to medication, and heart attack or stroke during the surgery. Breast cancer surgery causes scarring, changes to the way the breast looks and feels, and pain and numbness that may be long-term. Stiffness and loss of range of motion may occur in the arm on the affected side. After breast cancer surgery, many women develop lymphedema, swelling due to the buildup of lymph fluid in the arm on the side that was treated.

Even if the surgeon has successfully removed all of the tumors, a few cancer cells may remain behind, too small to detect. Radiation therapy helps to eliminate these remaining cancer cells. It is believed that cancer cells are more vulnerable to radiation since they divide so rapidly. Radiation kills cancer cells more easily, but the normal, healthy cells of your body are better able to survive and heal.

Internal radiation, also known as brachytherapy, is direct and localized. It involves implanting a small catheter (tube) or device into the body near the surgical site from which the tumors were removed. During the radiation therapy, small radioactive pellets will be introduced via the catheter or device. This type of radiation therapy is not as common.

Radiation therapy is usually delivered five days a week during the treatment period, which can last as long as seven weeks. In accelerated breast irradiation, treatment is given twice daily for only one to three weeks.

There are many classes of chemotherapy drugs. Most chemotherapy drugs are given in combinations of two or more drugs of different classes depending on what stage of cancer you have, how effective they are in your specific case, and how well your body tolerates any side effects. If one combination is not showing results, or if you experience intense side effects, your doctor may adjust your dosage or change the combination of drugs you receive.

Chemotherapy is administered in cycles of treatment and recovery. Cycles are usually two or four weeks long. Depending on which drugs you are receiving and how well you tolerate side effects, the drugs may be given only on the first day of the cycle, or as frequently as every day for 14 days. Each period of treatment will be followed by a recovery period to allow your body to rest. In some women with breast cancer, more frequent treatments and shorter recovery periods prove effective. This is called dose-dense chemotherapy. However, this type of chemotherapy may increase the intensity of side effects. For adjuvant and neoadjuvant chemotherapy, treatment usually lasts three to six months. Chemotherapy for advanced breast cancer may be given for longer.

During chemotherapy, some women use scalp cooling (cold caps) to reduce or avoid hair loss. Scalp cooling works by reducing blood flow to the scalp before, during, and after chemotherapy, limiting the amount of chemotherapy drug that reaches the hair follicles.

In about 25 percent of breast cancers, there is a genetic variation that causes tumor cells to produce extra receptors for a growth factor. This gene, known as human epidermal growth factor receptor 2 (HER2), causes the cancer to grow more aggressively. Herceptin is a member of a class of drugs called biologics. Herceptin (trastuzumab) and Perjeta (pertuzumab) are proteins designed to target the HER2 protein. They are believed to work by reducing the activity of growth factor receptors on cancer cells and assisting the body's immune system in attacking the cancer cells, thereby slowing the growth of tumors. Herceptin and Perjeta are administered as intravenous injections.

Kadcyla (ado-Trastuzumab Emtansine) is a similar drug believed to work by targeting and killing HER2-positive breast cancer cells. Kadcyla is given as an intravenous infusion during chemotherapy treatments.

Ibrance (palbociclib), Kisqali (ribociclib), and Verzenio (abemaciclib) are members of a class of medications called cyclin-dependent kinase (CDK) inhibitors. CDK inhibitors are believed to inhibit the growth of cancer cells. These drugs may be used in combination with a hormone-blocking drug called an aromatase inhibitor. CDK inhibitors are prescribed in cases where tumors are estrogen receptor (ER)-positive and HER2-negative.

Afinitor (everolimus) is another type of kinase inhibitor sometimes prescribed in cases where women are postmenopausal and breast cancer is advanced, hormone receptor-positive, and HER2-negative.

Lynparza (olaparib) is a targeted therapy in a class of drugs called poly ADP-ribose polymerase (PARP) inhibitors. Lynparza is believed to work by preventing cancer cells from repairing themselves once damaged by chemotherapy. Lynparza may be prescribed in women who have a genetic mutation of the BRCA1 or BRCA2 gene. (Read more about risk factors for breast cancer.)

Faslodex (fulvestrant) is a member of a class of drugs called estrogen receptor downregulators. Faslodex works by blocking estrogen from acting on breast cancer cells, thereby slowing the growth of the cancer. Faslodex is administered as an injection.

During and after treatment, keep eating a healthy diet, getting regular exercise, managing stress, and getting support wherever you can.

These steps can help you better recover from surgeries, cope with side effects, and avoid complications during breast cancer treatment.

Kelly Crumrin is a senior editor at MyHealthTeam and leads the creation of content that educates and empowers people with chronic illnesses. Learn more about her here. Palliative Care: Improving Quality of Life With Breast Cancer at Any Stage The term “palliative care” is often thought of as end-of-life care. However, it’s a common...

Palliative Care: Improving Quality of Life With Breast Cancer at Any Stage

The term “palliative care” is often thought of as end-of-life care. However, it’s a common...
read article > If you’ve been diagnosed with HER2-positive breast cancer, the best treatment for you will depend...

If you’ve been diagnosed with HER2-positive breast cancer, the best treatment for you will depend...
read article >

HER2-positive breast cancer is often treated with targeted therapies that can specifically find... If you were recently diagnosed with breast cancer, you may find yourself thinking about a...

If you were recently diagnosed with breast cancer, you may find yourself thinking about a...
read article > Following a breast cancer diagnosis, it’s natural to wonder about your prognosis. “Prognosis”... The Centers for Disease Control and Prevention (CDC) approved a second COVID-19 booster shot of...

Diabetes and Breast Cancer: What Is the Link? Diabetes is a major public health concern, as is breast cancer. Combined, their threat is...

Diabetes and Breast Cancer: What Is the Link?

Diabetes is a major public health concern, as is breast cancer. Combined, their threat is...
read article > A rash on the breast does not necessarily signal breast cancer. Many breast rashes are related to...

A rash on the breast does not necessarily signal breast cancer. Many breast rashes are related to...
read article > There are many misconceptions about what factors raise the risk of breast cancer. Although...

There are many misconceptions about what factors raise the risk of breast cancer. Although...
read article > Swimming can be great exercise following surgery for breast cancer, like a mastectomy or...

Swimming can be great exercise following surgery for breast cancer, like a mastectomy or...
read article >