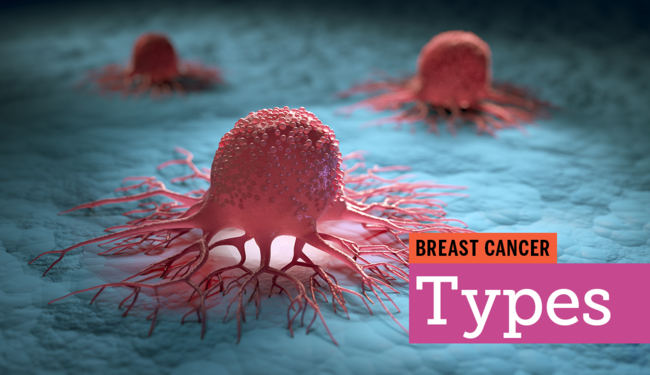 There are many different types of breast cancer based on the breast tissue the cancer began in, whether or not it has invaded surrounding tissue, and the shape or consistency of the tumor. Breast cancer is also described by molecular subtypes based on the microscopic characteristics of its cells, such as whether they have receptors for certain hormones or proteins.

Knowing which type and molecular subtype of breast cancer you have helps the oncologist (cancer specialist) predict the pattern of its growth and recommend the most effective treatments. The stage and grade of a breast cancer are other ways of describing the characteristics of the tumor and predicting its behavior.

Most cancers are described as in situ or invasive. "In situ" is a Latin term meaning “on site” or “in its original position.” In situ tumors are at an early stage and have not yet spread from the spot where it began. In situ cancer may also be described as stage 0. In situ cancer is easily treated, but if it is not diagnosed and treated, it is likely to become invasive. Invasive tumors have spread beyond the tissue where the cancer cells first began to grow. Stages I, II, III, and IV describe how and how far the invasive breast cancer is spreading. Read more about how breast cancer is staged and graded.

Doctors use many different words to describe types of cancer, usually based on the type of cell from which the tumor arose and whether it is benign (incapable of causing death) or malignant (capable of causing death). Carcinoma is the most common term used for breast cancer. Carcinoma is a type of malignant cancer that arises from epithelial cells — cells that form skin or line the inside of organs. Epithelial cells grow more quickly and divide more rapidly than many other types of cells, which makes them more prone to the disordered growth that leads to cancer.

It is possible to have multiple types of breast cancer tumors at the same time, or to have a tumor with characteristics of several different types.

DCIS is cancer that began in the milk ducts and has not yet spread. DCIS is usually easy to treat, but it can lead to invasive ductal carcinoma later in life if not treated.

IDC accounts for 80 percent of breast cancers. Invasive ductal carcinoma begins in the milk duct but has spread outside the duct into other tissues. There are many subtypes of IDC:

This cancer is made of tube-shaped structures. It usually grows slowly and is not aggressive. It accounts for 2 percent of all breast cancer diagnoses.

This is a soft, fleshy tumor that accounts for between 3 percent and 5 percent of IDC cases. It does not usually grow quickly or spread outside the breast.

These cancer cells float in a mucus-like fluid. It responds well to treatment and does not usually spread aggressively. Between 2 percent and 3 percent of invasive carcinomas can be described as being solely of the mucinous type. However, approximately 5 percent of invasive breast cancers have some mucinous properties.

Papillary carcinoma occurs most often in postmenopausal women. The tumor has small projections shaped like fingers. If the cancer cells are very small, the term micropapillary may be used. Papillary carcinoma makes up between 1 percent and 2 percent of invasive breast cancer.

Cribriform carcinoma grows in connective tissue between ducts and lobes in nest-shaped masses. Approximately 5 percent or 6 percent of invasive breast cancers have some cribriform characteristics.

This is a rare type of cancer, accounting for less than 1 percent of breast cancers. It usually responds well to treatment.

LCIS is a collection of abnormal cells that forms in the milk-producing cells of the breast. Although the term “carcinoma” implies cancer, the cells in LCIS are not yet cancerous, but they can indicate a higher risk for developing invasive breast cancer later on. LCIS is fairly rare and mostly occurs in women who have not yet entered menopause.

ILC accounts for about 10 percent of invasive breast cancers. ILC begins in the lobule of the breast, but it has spread beyond the cells of the lobe into other tissues.

Paget's Disease of the Breast

IBC is a rare form of breast cancer, accounting for only about 1 percent of cases. Inflammatory breast cancer causes the entire breast to swell and redden or darken, and symptoms become more serious quickly, sometimes within hours. IBC grows and spreads aggressively. IBC is more common in Black women than white women.

Apart from describing the location, shape, or behavior of a tumor, breast cancers can also be identified by specific characteristics of the individual cancer cell. Known as the molecular subtypes of breast cancer, these characteristics are extremely important in helping oncologists know how to target cancer cells with effective treatments.

Cancer cells from biopsied tissue are studied in the laboratory. Cancer cells may or may not have different kinds of receptors — proteins within a cell or attached to the outer surface of the cell — that the body uses to communicate with the cell. Receptors are like antennas that receive signals sent by certain hormones or other chemical messengers. When the hormone binds with the receptor, the cell receives the message. If a cancer cell has a certain receptor, it is said to be positive for that receptor. If the cancer cell lacks that receptor, it is said to be receptor-negative. The most important receptors in breast cancer bind with the hormones estrogen and progesterone. Growth in cells that are estrogen receptor (ER) or progesterone receptor (PR) positive for these receptors is fueled by estrogen and/or progesterone, so targeting these hormones can help slow the growth of the tumor.

Human epidermal growth factor receptor 2 (HER2) is not a hormone, but a protein that promotes the growth of cells. Some cancer cells have receptors for HER2. In these cancers, targeting HER2 can help slow the growth of the tumor.

Cancers that are positive for HER2 tend to be more aggressive, but treatments that target HER2 are so effective that most HER2-positive cancers tend to have a good prognosis.

In breast cancer cells with a normal-like molecular subtype, cells have similar characteristics to those seen in luminal A: ER and/or PR positive and HER2 negative. Breast cancer of the normal-like subtype has a slightly worse prognosis than luminal A.

Kelly Crumrin is a senior editor at MyHealthTeam and leads the creation of content that educates and empowers people with chronic illnesses. Learn more about her here.