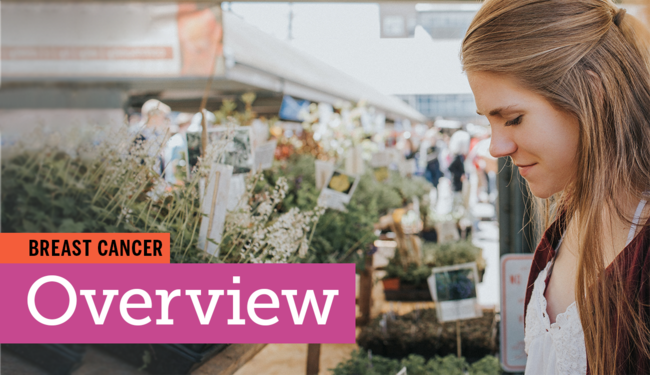 Breast cancer occurs when cells in the breast begin to divide and grow in an uncontrolled way. After skin cancer, breast cancer is the most common type of cancer in women worldwide. In the U.S., a woman is diagnosed with breast cancer every two minutes.

What Is Breast Cancer?

Like every tissue in the body, the breast is made up of individual cells. Normal breast cells divide in a regular, ordered fashion, forming new cells that are exact copies to replace old ones. Certain genes in each cell are responsible for telling cells when to divide and when to stop dividing. Other genes identify and fix problems in DNA that is copied wrong, or cause cells with bad DNA to self-destruct rather than keep multiplying. If a genetic mutation causes one or more of these genes to turn off in some cells, they can divide at a faster rate without regulation or order, becoming more and more mutated. When these disordered cells begin to invade nearby tissues or break off and migrate to other locations, they are called cancer.

There are many different types of breast cancer based on where in the breast it begins, its genetic characteristics, and other factors. Some types of breast cancer tend to grow more quickly and spread more aggressively than other types. When cancer is diagnosed, the doctor evaluates the stage and grade of the cancer, terms that describe how fast it is likely to grow and how far it has spread. Determining the type, stage, and grade of breast cancer helps the oncologist predict the pattern of its growth and recommend the most effective treatments.

The History of Breast Cancer

Breast cancer has been observed and studied for thousands of years. In the ancient Egyptian medical text known as the Edwin Smith Surgical Papyrus, written more than 1,600 years BCE, several cases of breast cancer are recorded. The ancient Greeks studied cancers extensively. Renowned Greek physician Hippocrates used the term karkinos (crab) to describe cancer – a tumor surrounded by blood vessels reminded him of a crab that had dug down into the sand. Today, we used the related term “carcinoma” to refer to a malignant tumor of the skin or organ lining. In 400 BCE, Hippocrates categorized progressive stages of breast cancer. Hippocrates believed that imbalances in the humors, or bodily fluids – defined as blood, phlegm, and yellow and black bile – caused all disease, including breast cancer. His theories dominated medical thinking for hundreds of years.

Another persistent breast cancer theory was formulated during the 18th century. Bernardino Ramazzini, a Renaissance-era doctor in Italy, observed high rates of breast cancer among nuns. He theorized that breast cancer was caused by pent-up sexual desire. Centuries later, scientists would realize that childlessness – not celibacy – increases a woman’s risk of breast cancer.

During the 18th and 19th centuries, breast cancer was scientifically studied by many doctors across Europe and America. Surgery became the dominant avenue for breast cancer study and treatment. Scottish surgeon John Hunter, sometimes called the father of exploratory surgery, found that if a tumor had not invaded nearby tissue, it could be successfully removed. This discovery made the operating room the forefront of breast cancer study and treatment. Anesthesia became available in 1846, and sterilization of instruments and the use of sterile gloves were also standardized around that time.

Hunter was also the first to discover another bodily fluid – lymph – and theorize its involvement in breast cancer. In 1878, British doctor Thomas Beatson discovered that the mammary glands of rabbits stopped producing milk after removing their ovaries. Doctors began to use oophorectomy (surgical removal of the ovaries) in advanced cases of breast cancer.

William Stewart Halsted, professor of surgery at Johns Hopkins University, developed the radical mastectomy for breast cancer in 1894. The surgery disfigured a woman, removing her breasts, lymph nodes, and underlying muscles in one piece. By 1932, English surgeon David Patey developed the modified radical mastectomy, which preserved the pectoralis muscle and was less disfiguring. In the 1970s, modern clinical trials found that less extensive surgery is an equally effective treatment for most women with breast cancer. Today radical mastectomy is performed less often; most surgeons focus on breast conservation and reconstruction.

In the 1930s, English surgeon Geoffrey Keynes pioneered breast-sparing surgery followed by radiation therapy. Radiation would become more accurate in the late 20th century as advances in physics and computers made it possible to precisely target radiation.

1953 was a turning point for breast cancer treatment. Roy Hertz and Min Chiu Li, researchers at the U.S. National Cancer Institute (NCI), became the first to achieve the complete cure of a solid tumor. The cure was chemotherapy with a drug called Methotrexate. Chemotherapy is used widely in breast cancer treatment today, often after surgery to destroy any remaining cancer cells in the body. Using chemotherapy after surgery is called adjuvant therapy. Adjuvant therapy was tested first in breast cancer and found to be effective in treating other types of cancer.

The growth of breast cancer was long suspected by doctors to be dependent on hormones. American oncologist Elwood Jensen found proof of this theory in 1967, when he discovered estrogen receptors (ER) and progesterone receptors (PR) on breast cancer cells. Hormones bind to the receptors on a cell, traveling to the nucleus where gene regulation takes place. Jensen found that Tamoxifen blocks some of the effects of estrogen, slowing the growth of the cancer.

The 1990s began a new era in breast cancer research as scientists learned how specific gene mutations, including BRCA1 and BRCA2, were powerful risk factors in the development of breast and ovarian cancer in women. Targeting aggressive forms of breast cancer in women with certain genetic mutations, doctors began using hormone-blocking drugs such as Tamoxifen and the use of prophylactic (preventative) surgery to reduce their risk for developing cancer.

Many new types of treatment have been developed in the past 25 years. Antibodies are proteins used by the immune system to identify and neutralize dangerous invaders such as bacteria and viruses. In the 1990s, researchers began developing genetically modified antibodies that would target hormone receptors on breast cancer cells and interfere with the cells’ growth. Also known as biologics, Herceptin (Trastuzumab) and Perjeta (Pertuzumab) are monoclonal antibodies currently in use to fight breast cancer. Many more monoclonal antibodies and new classes of drugs are currently being studied.

How Common Is Breast Cancer?

Around the world, breast cancer is the most common type of cancer in women. In the U.S., about 12 percent of women, or one in eight, will have invasive breast cancer during her life. Hereditary and environmental factors may raise or lower that risk. There are more than 3 million women living with breast cancer – currently under treatment or previously treated – in the U.S. today.

What Is the Prognosis for Breast Cancer?

How is breast cancer diagnosed?
Breast cancer may initially be detected during a regular manual (hands-on) breast exam or during a screening with a mammogram. To diagnose breast cancer, the doctor will perform a needle biopsy to collect a small tissue sample. Cells from the sample will be examined in a laboratory. The doctor may also order imaging tests such as mammogram, ultrasound, or magnetic resonance imaging (MRI) to better understand the shape and structure of the cancer. Learn more about the breast cancer diagnosis process.

Article written by Lisa WuHaving any type of cancer can be tough, but working through those...

Article written by Lisa WuHaving any type of cancer can be tough, but working through those...
read article >

Thousands of members of MyBCTeam connect with one another and read each other's stories to gain...

Thousands of members of MyBCTeam connect with one another and read each other's stories to gain...
read article >

Article written by Nyaka Mwanza The goals of treatment for metastatic breast cancer (MBC) are to...

Article written by Nyaka Mwanza The goals of treatment for metastatic breast cancer (MBC) are to...
read article >

Article written by Laurie Berger Whether you’re newly diagnosed, in treatment, or a breast cancer...

Article written by Kelly Crumrin According to Harvard Medical School, those of us living with...

Article written by Kelly Crumrin According to Harvard Medical School, those of us living with...
read article >

Article written by Kelly Crumrin Once breast cancer is diagnosed, it is graded and staged. The...

Article written by Kelly Crumrin Once breast cancer is diagnosed, it is graded and staged. The...
read article >

Article written by Kelly Crumrin There are now more treatments for breast cancer than ever...

Article written by Kelly Crumrin There are now more treatments for breast cancer than ever...
read article >

Eat healthier. Exercise more. Learn a new skill. Pay off a credit card. Many of us have made...

Eat healthier. Exercise more. Learn a new skill. Pay off a credit card. Many of us have made...
read article >

This time of the year can be overwhelming with expectations around the holidays, and living with...

This time of the year can be overwhelming with expectations around the holidays, and living with...
read article >

Two Ways to Get Started with MyBCTeam

Connect with others who are living with breast cancer. Get members only access to emotional support, advice, treatment insights, and more.

close
ABOUT BREAST CANCER TYPES DIAGNOSIS CAUSES SYMPTOMS TREATMENTS SIDE EFFECTS STAGES
New to MyBCTeam? Learn More
Quick Links
Q+A Treatments A-Z Resources Are you a provider? Crisis
About Us
What is MyBCTeam? Partner with us Terms of service Press/News Privacy policy Cookie policy
Help With This Site
Getting started FAQ Community guidelines Contact us